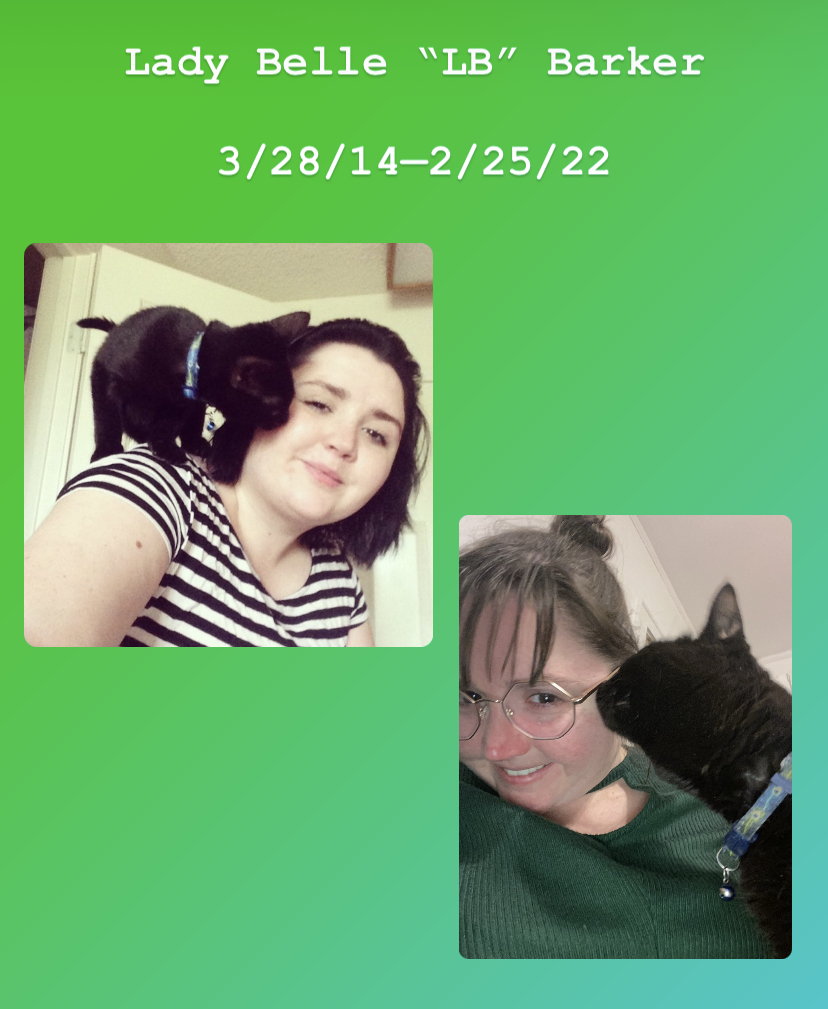 LB was adopted as “Fiesta” on 6/22/14 in Cookeville, Tennessee. I was 22, less than a month post grad, working my first Big Girl Job™️, living in supporter housing with a complete stranger, over over 500 miles away from my childhood home and nearly 1000 miles away from the city I considered home.

That’s where my idea to become a cat owner sparked. Honestly I have never been an animal person, to this day I’m not an animal person. Before LB the only real amount of time I spent around a cat was babysitting for a family with a cat. A cat that I was so afraid of I would get it to follow me into the bathroom & then run out & shut the door.

Anyway, let’s get past my horrible introduction to cats. Then came a mouse problem. I spent about seven seconds on google & I learned the only fool proof way to get rid of mice was a cat. Maybe if I had spent nine seconds on Google I would have learned the way cats get rid of mice is often by killing them & delivering their carcass to you. I didn’t know anything about cats back then. I barely know anything about cats today.

I do know how to make life changing decisions based on nostalgia. My favorite show in middle school was Sabrina The Teenage Witch so I decided to get a black cat. Once I got to Tennessee I started looking for a black cat to adopt and I found one, about an hour and a half away from where I was staying.

The thing about adopting a cat when you’re afraid of cats is it’s a pretty ridiculous thing to do. I would definitely recommend it.

Despite the fact that the paperwork stated LBs gender M for Male there was a miscommunication at the adoption center& I named him the most feminine name—Lady Belle. I was inspired by two of my favorite attention seeking fictional characters LADY Gaga and Tinker BELLE.

I had LB named before I even laid eyes on him which in hindsight is ridiculous but in the end it made perfect sense. LB loved attention. If I believed in The Five Love Languages I’d bet his was physical touch. LB loved to be pet, especially on his face/cheeks.

LB also loved chasing, catching & carrying plastic bottle caps—it was his favorite game. My mom was his favorite playmate when it came to bottle caps. She would kick them from the front room, through the living room and into the kitchen. LB loved to pounce on the bottle caps as they slid across the floor.

Although I try to stay away from single use plastics nowadays I know whenever I see a plastic bottle cap I’ll think of LB and all the joy they brought him. Rooms were littered with plastic bottle caps and on the rare occasions I would try to tidy them up LB would come running from wherever he was napping within moments of the plastic hitting the acrylic on my nails. That was his cue it was time to play.

The sound of a can opening was a cue it was time to eat, even if the can wasn’t for LB. When we lived at my parents house I could open a can in the kitchen and almost immediately hear LB scampering up the stairs from the basement to see what was for dinner.

More often than not, those cans weren’t for LB but that never stopped him from coming to check. By coming to check I mean whining as loud as he could for as long as he could. I remember one particularly grumpy day thinking how truly annoying his whining was.

Once I knew LB had little time left I moved the two of us back into my parents house, I knew I needed support but I also knew LB deserved to be surrounded by as much love as possible in his last days. A few days before he passed I overheard my dad in the kitchen telling LB “I missed you but I didn’t miss your whining”. Then came the day I opened a can, LB a few feet away, and there was silence. He barely looked toward me and the can and he didn’t move. I’ve heard people say the things that annoy you about others are often the things you come to love but I never believed that until the day LB didn’t whine for an opened can.

I would happily give up Doctor Pepper if I could hear LB whine one more time. There’s this thing parents of tweens like to post on Facebook that goes “One day you will carry them on your hip then set them down, and never pick them up that way again” and that always made my eyes well up with tears. I hate when people talk about pets as if they’re human children so I want you to know I’m not comparing a cat to a child but I do wish I had known the last time LB whined. In this totally made up scenario where I know the future I would like to think I also have more patience for things that annoy me for basically no reason.

Once I knew it was time to say goodbye LB got to do probably his favorite thing on earth: eat little pinched off slices of Krakus deli ham. This became a lunchtime tradition when we lived with my parents. My dad loved to pinch off a bit of ham from his sandwich & give it to LB. My mom got in on the action too. I hardly ever gave LB ham because it kind of freaked me out to think about a cat eating a pig but that day I got over that & ripped up as much ham as I could for LB.

I’ve been attempting to find meaning in losing LB, some way to make it nice & not horribly painful. Except there is no meaning in any being not making it to old age, it’s just a tragedy. Honestly that attempt was disrespectful to his memory. It’s a terrible loss. That’s all I got.